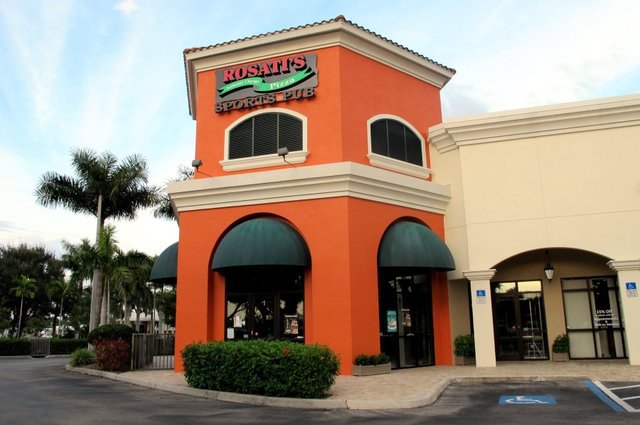 Since March 20th restaurants have not been able to provide dine in service and can only provide takeout and delivery service. This is a huge adjustment for so many of our favorite local restaurants. Those who could not make that adjustment, closed. We do hope that they will be able to open once dine in service is allowed. We decided to test the waters so to speak and see try some take out and use a delivery service. We chose to order Rosati’s via DoorDash but more about them later. 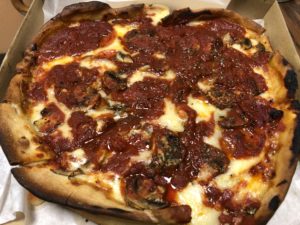 We ordered the Tamiami Trail location. We wanted to try their Chicago Pizza as we heard so much about how good their pizza and other dishes are. We were excited to see they also had Zeppole’s ($6.99) and Fried Dough Nuggets ($6.99) so we order them as well as a small Chicago pizza ($14.99 toppings $2 each) and a build your own pasta of Penne Pasta with the meat sauce on the side ($12.95). We asked for no cheese on the garlic bread as one of my dining partners cannot eat cheese. We placed the order through DoorDash which told us our food would arrive in 55 minutes.

This is where everything went down hill quickly. The DoorDash website kept giving DNS errors and then it would come back up. We kept checking because the site was not telling us if we had a driver or anything else. Eventually we saw that we were assigned a driver and could track his progress. Our food arrived about 2 hours after we placed the order. This is of course not a reflection on Rosati’s.

When we unpacked our order, we noticed that the Zeppole’s and Fried Dough Nuggets were missing. So, we called Rosati’s and we were informed that they had noticed the omission and had contacted DoorDash to send another driver to bring the rest of our order to us. So, we waited. 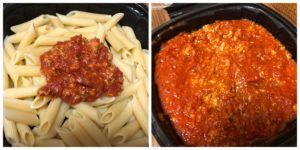 We were very hungry at this point, so we went ahead and had our dinners. The pizza is ok. The dough is a bit dense and it could use more sauce on it. It had some flavor but could have used more. There were ample toppings though. The Penne with meat sauce was a large portion and the flavor was good but nothing to make it stand out from any meat sauce you can get elsewhere.

After we had finished, we had to call Rosati’s again as our Fried Dough Nuggets and Zeppolas never arrived. They offered to have their driver bring us these items or they could contact DoorDash to give us a refund. Honestly at this point we did not trust DoorDash to be able to handle a refund. Rosati’s driver did arrive with the rest of the order. By this time over 3 hours had passed since we began our adventure. 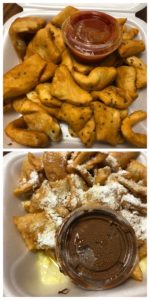 We were excited to try them both however as they are very similar…somebody in their kitchen got both these dishes confused as the one with the powdered sugar/Nutella also had the butter and garlic on them. The one with the marinara did not have the butter and garlic on them. At this point we just laughed. Both those dishes were a disappointment though. The consistency of the dough was just not what we like and the flavor, well that was hard to tell given the mix up.

We do want to acknowledge that Rosati’s was superb to deal with during this adventure. They were pleasant and very accommodating and that was very much appreciated. Given the circumstances that restaurants must operate in for the foreseeable future, we can hope that they get organized to handle the increase in their usual take out service. As for DoorDash, they really need to upgrade their system. We did try to get on the app when the site went down, but that was not working either. We are in no hurry to use them again.

Previous Post Online Accounting Options for Small Business
Next Post This is the Universe calling! I come as a friend!