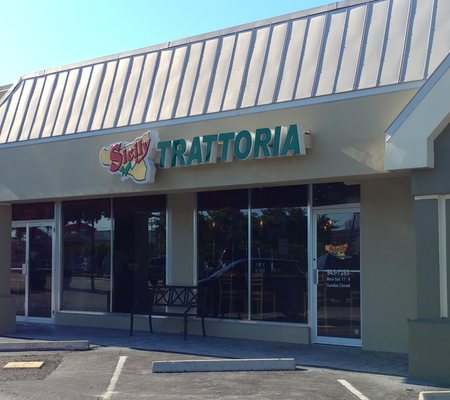 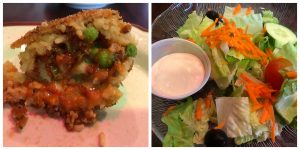 Sicily Trattoria is a locally owned and operated restaurant located in the Big Johns Plaza in Cape Coral. They have been in their current location since 2012, increased their size in 2016 but have been serving Cape Coral since 2007.  Originally Mimi Tumminello and her sister Marie Consigliati could be found in the kitchen. These days it is Vinny Tumminello who is carrying on the family tradition.

The restaurants longevity and expansion in size speaks to their success. These days it seems restaurants open and several years later are closed for a variety of reason.  So, we wanted to see for ourselves why this restaurant in so successful.

Sicily Trattoria is cute and a very open concept. One can see into the kitchen as they prepare your meals. They also have a small bar area.

We started their Arancini (Rice Ball $6). Theirs is filled with rice, Bolognese, peas, and cheese and is fried. It was excellent and so flavorful. If you like rice balls, then be sure to try theirs. For dinner we opted for the Lasagna ($18) and the Cavatelli with Bolognese sauce ($18).

The lasagna portion was very large, served hot and layered with flavor. Not all lasagnas are created equal but this one is excellent. Cavatelli is a pasta not often served in Italian restaurants. Cavatelli originated in the 1200’s in the southern region of Molise and it means little hallows. It is one of the oldest pasta shapes. Sometimes it is considered similar to the more widely known Gnocchi. Although they really are not similar at all.  It is best served with thick sauces, so we opted for the Bolognese. Their Bolognese was spot on with the taste but a bit thin and watery for my taste.  However, I would certainly return to have this dish again. 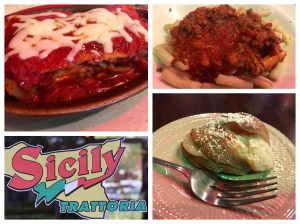 For dessert we could not resist the Sfogliatella ($4) served warm right out of the oven. They take 15-20 mins so it is best to order them when you are your meal. We did not do that, but it was well worth the wait. If you have never had one of these gems… they are layers of flakey dough filled with a custard-like mixture of semolina, sugar, ricotta, eggs, and a hint of cinnamon and citrus flavors. Traditional ones sometimes have candied citrus peels. I have to say they were absolutely spectacular and the best I have had in a very long time.

The service was a bit off as we were served our salads before the appetizer. There were a few other minor mistakes but as our server was new it was easy to be patient. She was very professional but friendly as well.

There are plenty of choices for Italian restaurants in Cape Coral, but you will want to add this one to your list.