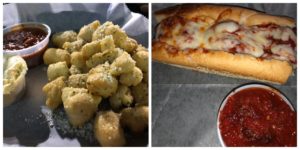 One of the biggest debates is Chicago Vs New York…pizza that is. To be honest I am a NY kinda pizza eater but open to the possibilities that Chicago pizza might…just might be good.  So, when Buddyz opened in the Forum, we just had to give them a try. We found out about them through Instagram (and they say social media does not work)

Buddyz is located where the Il Forno once was. This is, we believe, is the 3rd restaurant that has been in this location. The previous ones did not close for lack of business but were sold and the new owners changed the concept. Ironically, we have reviewed all of them. That location is one of the few sit down options in that area.

They were only open 3 days when we went. Normally we would not visit a newly open restaurant but their food look so inviting we chanced it anyway. Buddyz was packed and there was not an open seat. Luckily one table was getting ready to leave and offered their seats to us.

Being open for only 3 days one would expect some issues and they did have a few but nothing that could not be corrected. We had an order snafu but more about that later.

Our server told us that it would be a 35-minute wait if we wanted a Chicago Deep Dish pizza and 20 minutes if we wanted a thin crust. So, we thought we would start with an appetizer. They were out of the cheese sticks and fried ravioli, so we settled on the Beer Nuts ($7) lightly fried pizza dough tossed with garlic butter and parmesan, served with marinara. I ordered the 10” Chicago Deep dish with peperoni and mushrooms ($15 plus $1.25 for each topping). My dining partner ordered the Homemade Meatball Sandwich ($10) meatballs smothered in marinara on French bread. It comes with choice of French Fries or House/Caesar salad or you can add Mozzarella, Sweet Peppers, Hot Giardinara or Onion Rings for $1. They do have Gluten Free or Cauliflower Pizza 10” crust as an option as well. Check out their entire menu . 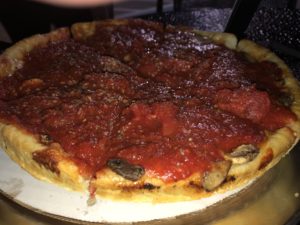 So, here is where the snafu comes into play. We were waiting and waiting but it was a nice evening and we hardly noticed until we realized we were getting really hungry. Just about that time, my dining partners salad and sandwich arrived. Huh? Where are the Beer Nuts? Next came my pizza. So, I inquired as to where my Beer Nuts were. The food runner gal said she would check on them. In a few minutes our server appeared and explained that another server took them and served them to her table. She also said they would make me some if I still wanted them. I said I did. Now if my order was truly taken by another server in error, then where was their order? I suspect our server forgot to put in the order or the kitchen messed up. The manager brought out the Beer Nuts and said there would be no charge because of the error. That was very nice of them.

One of the owners, in this case Jim, was going around visiting and checking on everybody. He would visit while people were waiting and then come back when they were all done and waiting on check. He came by our table once and did not come back when we were all done and waiting for the check…perhaps he thought we were upset but we were not. They handled it and all was good.

As for the food. It is really good. The pizza had flavor, the sauce had spice to it and the crust was buttery but not overly so. The Beer Nuts were delish. The sandwich also tasty. The meatballs were good and so was the sauce. Some red sauces if not cooked long enough can cause some to have heartburn. That was not the case with theirs.

As for which is better Chicago or NY…if done right both are excellent. Neither is authentic compared to what you get it Italy, so really why argue over it. Oh, and to settle another argument…it is called sauce not gravy. Just thought we would end that debate too.

Overall though Buddyz is great place to go for Chicago pizzeria food. They are open daily 4pm- 9pm.