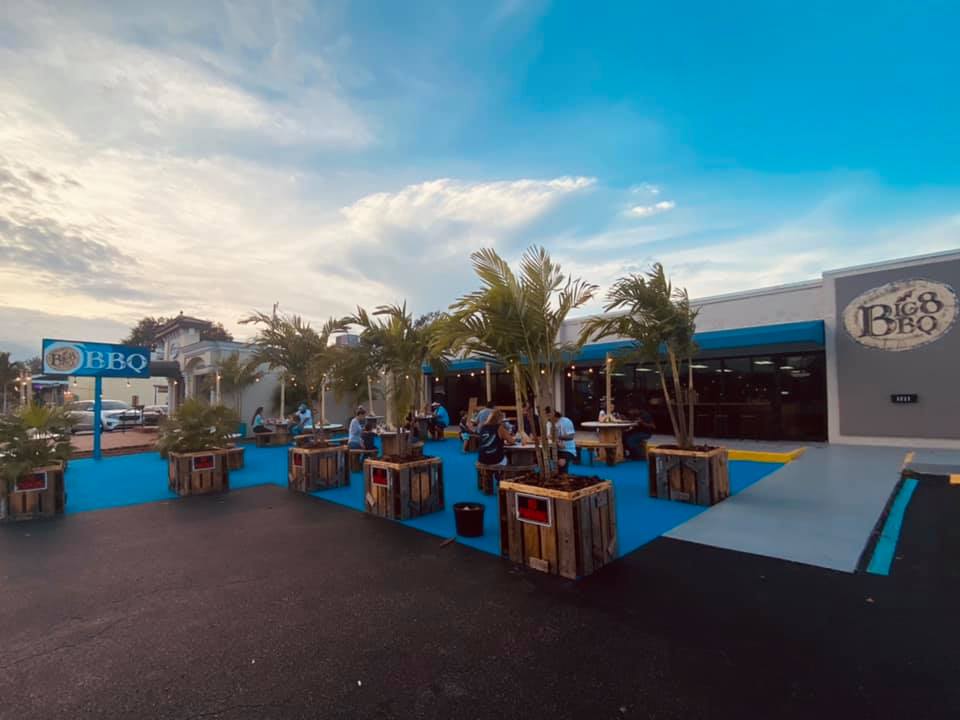 There is a new BBQ restaurant in Cape Coral, and they are making their presence known. Rarely if ever do we review a new restaurant when it first opens but we decided to go to Big8 BBQ on their grand opening day as we have been hearing about them for several weeks before they opened.

They have a unique approach to their dining experience. You can order at the counter and then choose your own seating either inside or outside or you can opt for the side down option with table servers. They also do not have closing hours… they open at 4 pm and close when they are out of meat. The buildout was done by one of the owners using reclaimed wood in many places. He also built the tables used in the booths. They did an outstanding job.

Their menu is simple… 8 meat options, 8 sides, 4 sauces. You can do a combo that comes with a side/beverage or just meat combos without the side/beverage. We opted to do a 2 meat combo ($10) and add on 2 sides ($3 each) We then shared so we could get try a variety. My dining partner ordered the ribs, but they were already out of them, 3 hours after opening. So, they opted for the pulled pork. I opted for the sausage (brisket). For sides we had cornbread and smoked potato salad. They brought us an extra cornbread. We also tried all 4 of the sauces which are made in house from their recipes. 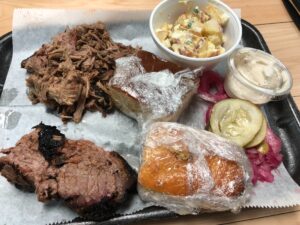 Let me just say that I am not a fan of pulled pork or cornbread. If not done right the pulled pork is dry and stringy and cornbread can also be dry. However Big 8 BBQ made me a fan of theirs. When they say their BBQ is so good you do not need sauce, they mean it. The pulled pork was tender and moist and very flavorful. Neither of us have had sausage brisket before and it was awesome!  Tender and moist and packed with flavor. They know how to make wood smoked BBQ.

There were only 2 hiccups. When they seated us, our table needed to be wiped down. The pulled pork when it arrived it was cold. The sausage brisket was warm but not the pulled pork. They did apologize and gave us a whole new serving of the pork.

This is a very casual restaurant. They serve the food on disposable trays and use plastic utensils. However, it is the best BBQ I have had in many years. We wish them much success and we anticipate that they will do well.

Overall rating: Off The Chain Good!