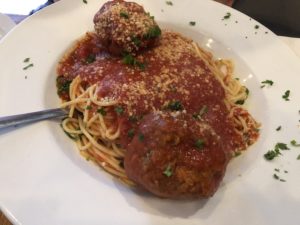 There are many, many, many Italian restaurants throughout SWFL.  However, finding a good one can be a challenge. We heard about Il Forno, so we thought it might be worth the drive to head east of I-75 to give them a try.  We were hoping that we would be in for a real treat as Il Forno is owned by the original owner of Il Pomodoro. I must say we were not disappointed.

The Forum has entrances from Colonial Blvd as well as MLK (SR82) and Il Forno is located near 5 Guys. The Forum has other restaurants such as Buffalo Wild Wings, 3 Pepper Burrito Company, Orange Leaf Frozen Yogurt, Bentofu, Firehouse Subs, Moe’s, Maverick Grill, and McAlister’s Deli.

Il Forno is a small quaint Italian restaurant that has the classics as well as many creative dishes. You can see their menu at MENU 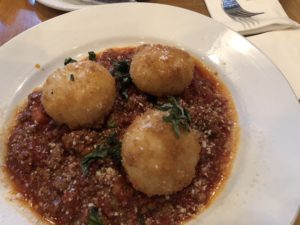 My dining partner chose the Spaghetti and Meatballs ($15.00) and I chose the Cavatelli Spinachio & Broccoli ($16.50). Entrees comes with choice of soup (Pasta E Fagiole) or Salad. We also had the Arancine Bolognese, which are rice balls (3) on top of Bolognese. The Bolognese was excellent. The rice balls were good. The entrées are large portions and were served hot. The Cavatelli was excellent and had nice size pieces of garlic. The spaghetti and meatballs is served with 2 nice sized meatballs, that were more meat than filler. 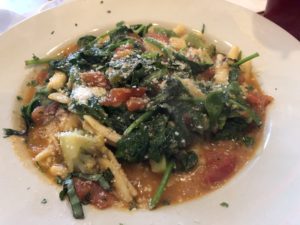 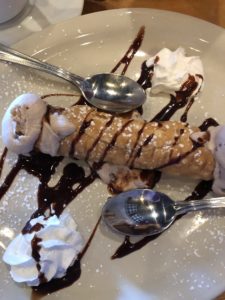 It was truly a wonderful experience and we were excited that there is an Italian restaurant east of I-75 that provides good food and service. So, should you find yourself out in the eastern portions of Fort Myers you will want to stop by and give them a try.