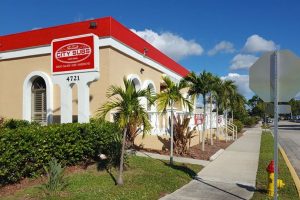 This Restaurant is closed!

Cape Coral is known for having a large variety of locally owned restaurants in or near the downtown area. Recently added to your choices is City Subs. They are located on the corner of Vincennes and 47th Terr.

City Subs carries a large variety of subs and sandwiches and has a salad bar, including free ice cream for dessert. They also have 2 different soups of the day. Orders are taken and paid for at the counter and they deliver it to your table. They have a soda fountain for drinks and serval types of iced tea. I guess you could say they are similar to that well-known deli franchise.  However, being locally owned the products they use, and the service is so much better. City Subs has a neighborhood sandwich shop feel to it as opposed to a cafeteria feel like other places tend to have.

We were warmly greeted when we entered. We took some menu and sat down to determine what we were going to have. We settled on the salad bar, soup and the half roast beef sub. The subs were made to order and by the taste of the roast beef it was quality meat. The lettuce, tomatoes etc. were all fresh. The soup was New England Calm Chowder. It was delicious, but it could have been a bit hotter. They advertise that their salad bar has over 40 items on it. I did not count them, but it has a pretty good selection from what my dining partner found. He also said all the items he chose were fresh and the dressing were good.

While we were there, we were treated to some samples on their chicken salad, tuna salad or spinach artichoke all on a cracker. They had so much flavor. What a nice touch that is.

The décor is all geared around Cape Coral and old Cape Coral. This is nice to see so that those who are new here can see a bit of what it was like at one time.  They have a rather larger decorated chair outside on the corner for photo opportunities. What fun.

They do serve beer and wine and have plans to open for dinner with a different concept, steaks. The one challenge they have is parking. You need to park either in the street or across the street. Those that are familiar with downtown Cape Coral my not find this a challenge at all. I personally do not find it a deterrent to eating there unless it is raining.

The décor is all geared around Cape Coral and old Cape Coral. This is nice to see so that those who are new here can see a bit of what it was like at one time.

Overall, being new, they are headed in the right direction. The quality if above average and so are the flavors. So, when you are in downtown Cape Coral, stop by City Subs and give them a try and let us know what your thoughts are.