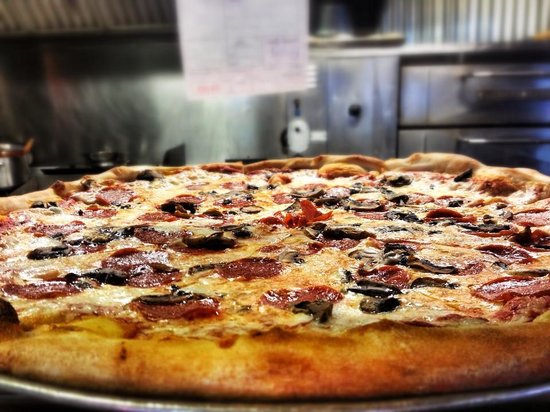 Recently the Discriminating Diner ventured out to a South Ft Myers eatery that specializes in Italian cuisine.  Myself and my two dinning partners were looking forward to our lunch at Citrola’s on McGregor Blvd in South Ft Myers.

Our waitress, who I can only refer to as “our waitress” as she did not introduce herself by name, was prompt to the table and to take our drink order.  During the drink wait time we looked at the menu and thought the prices were a bit high, but if the quality was there we didn’t mind paying the extra.  Average appetizer is $8.  The average lunch meal cost is $9.  The average Pizza cost is $17.  The wait time to receive our drinks was what anyone would expect, not long at all.  Once our drinks were on the table, our waitress asked if we wanted any appetizers to which we replied an order of “Cheese Wedges” and an order or “Fried Calamari”.  Our waitress told us that they did not have the “Cheese Wedges” but did have Cheese Sticks to which we said that was fine.  Once our waitress had the order, she left and returned quickly with a carafe for each of us with our beverage.  This told us right away that they were short staffed as in doing this meant that our waitress did not have to visit our table often to check on our drinks.  We did notice that she was the only one on the floor in the dining room, but then again there were only three tables.

While we were waiting for our appetizers to come out, we took in the décor of the restaurant.  It does have a nice ambiance for the eye with an exception of one element.  There are half walls that separate the dining room into a few different sections.  Nice touch as it adds a bit of privacy for the patrons.  However, placed on top of the walls were wine bottles, again a nice touch, but each bottle was empty, truly taking away from the ambiance they were trying to achieve.  For my own taste it missed the mark as it was like displaying an empty used plate from a previous patron.  It would serve much better to use full bottles of wine as that would add an air of class and sophistication to the overall ambiance.  After all, diners really do not want to look at used items while they are trying to enjoy their meals.

Speaking of meals, by now we had been waiting quite a while for our appetizers to come to the table.  Now keep in mind there were only two other tables in the restaurant so they were not that busy, at least not busy enough to warrant a wait time of more than 15 minutes.  Finally our waitress, still don’t know her name, came by and told us appetizers would be up shortly and would we like to place our lunch order at this point.  We did so.  I ordered a Calzone with Pepperoni, my second dining partner ordered a Stromboli and my third dining partner ordered a Meatball Parm Sub.  With the order given, our waitress was once again away from our table.  We noticed she was delivering lunch to the table across from us in the dining room.  The one patron had ordered pizza, which looked inviting.  The waitress placed the pizza on the table and then quickly left.  We were surprised that she did not serve the first piece to the patron.  We then watched the patron serve himself the pizza.  He put the serving spatula under the piece he wanted and picked up the piece of pizza and placed it on his plate, which successfully gave him the crust as all the toppings slide off the piece and stayed on the pizza pan.  He then scrapped off the toppings onto his piece of pizza.  We thought perhaps that this was just a fluke but no we watched it over and over again with other patrons as our dining visit went on, toppings falling off the pizza while patrons were serving themselves.

Our appetizers arrived.  The Cheese Sticks looked good, served with a side of sauce and the Calamari looked good to the other two who enjoy such items.  I started with the Cheese Sticks, looking forward to something I truly enjoy.  Cheese Sticks with Sauce!  Bite one, something is askew, I need to take another bite and yes indeed, I was tasting something that I was not expecting.  SALT!  I then tried a Cheese Stick alone and it was not that, so I then tried the Sauce and indeed the Sauce was over salted!  I had my two dining partners sample the sauce and they too conclude that it was over salted.  Unfortunately I had to enjoy my Cheese Sticks with limited Sauce, as even though it was over salted I do prefer Sauce on my Cheese Sticks.  My two dining partners were eating away at the Calamari also disappointed with the dish as it was under seasoned, over cooked and just not something that could be enjoyed.  I did try a piece of the Calamari and found it to be tough, rubbery and had an over bearing seafood flavor that really was not pleasing to me.  They both concurred that it really was not the best they had ever had and their sauce too was over salted.  Well at least we had our main courses to look forward to at this point.

Which sitting there, we began to pay attention to the music that was being played in the dining room.  Quite eclectic to say the least.  We would hear Pavarotti, then we would hear an Irish Folk Song, then a Pop Song, then a 50’s Tune, then back to some Italian Song, then to some Indian Sounding Music.  It was as if Citrola’s was playing “spin the dial” with the music!  It would have been much more appealing if they would have just let the Italian Music play to keep with the over theme of the restaurant.  Especially if you are going to keep your patrons waiting to receive their meals.

After another wait, and still the restaurant now has an additional table, so there are 4 tables total, so wait times should not be that long, but for whatever reason they were!  We finally received our lunch entrees and while looking good we were hoping that their taste was on the same level.  Let’s start with the Stromboli.  It was on the smaller side, and for $10 we felt it should have been a bit larger or less expensive.  The ingredients where chopped up inside, giving the illusion that there was a lot of pepperoni, salami and ham inside when there truly wasn’t that much at all.  My dining partner had to truly search for the salami to which he found very little.  Now on to the Meatball Parm Sub.  Two meatballs cut in half with very little sauce (thankfully as we had already realized the sauce was over salted) and skimpy on the cheese.  Again for $8 we would either expect a better sub or a lower price.  However, the flavor of the sub was good according to my dining partner.  My Calzone was much the same as the Stromboli, small in size and I had added pepperoni to my Calzone, which also had been cut up giving the appearance that there was more pepperoni than there actually was, which to me is very disappointing.  Paying $9 for a Calzone I at least expect there to be an adequate amount of ingredients.  The sauce served with my Calzone was even saltier than the sauce served with my Cheese Sticks!  I didn’t need a carafe of my drink, I needed a vat of my drink to quench my thirst!  Once we finished our meals as best we could, our waitress, again still do not know her name, asked if we wanted any dessert.  We were hoping for a saving grace for the meal and ordered the Canoli and the Zeppolis, each $4.  Nothing beats a good Canoli and Zeppolis.

Again, we waited what seemed like an over extended period of time, but the restaurant did gain two more tables for a total 6 tables for their lunch time rush!  Finally our waitress arrived with our dessert items. The Canoli were two small canoli on a single plate.  $2 for each Canoli, well ok if they are awesome!  Awesome they were not, the canoli filling was gritty.  Almost as if regular sugar was used to create the filling, we were not impressed and between the three of us we could not finish the two canolis!  The Zeppolis were buried under what seemed like a quarter pound of powder sugar!  They were over cooked as they were tough, very tough!  I had to pound my Zeppolis on my plate to remove the excess powder sugar and much to my dismay when eating them, towards the end of my chewing was a strong flavor of……….you guessed it, SALT!!!  Enough with the salt!!  You know when you are not having a great meal when your dining conversations turns to other restaurants you need to go to as the one you are at is not all that pleasing to the appetite!

I must add that the whole time we were at Citrola’s,  never once did a manager come over and welcome us, inquire how our meal or service was, no table side appearance at all.  Over all our experience was less than favorable. Our bill was over $60, not including tip!  Many other better places to go for lunch that will not cost you as much and you will get a much better meal!!  I will not be returning to Citrola’s, there are way too many other Italian Restaurants in the area to subject myself to this type of dining experience again!  If you are easy to please, don’t pay attention to the flavors of your food and really are a fan of fair cuisine, this is the place for you, otherwise search beyond Citrola’s.  Bon Appetite…………else where!!!