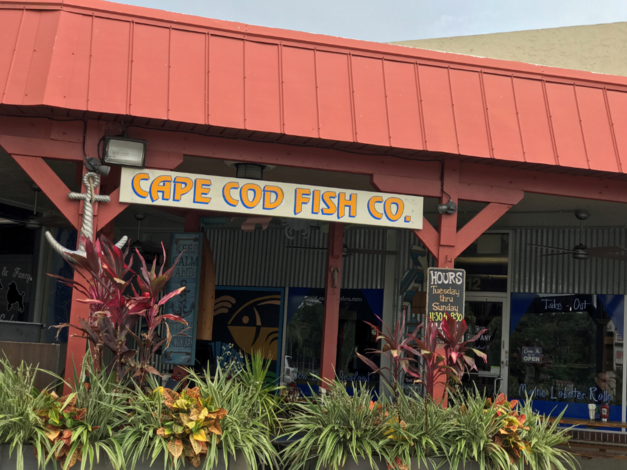 The Discriminating Diner found themselves at the Cape Cod Fish Co. in S. Ft. Myers this time. I must first preface this review with the following disclaimer. I am not a fan of fish at all, just not my thing, but my dinning partner loves fish so I gave in to their desire to try a seafood restaurant. Ok, now that I have that out of the way, on with the review!

The Cape Cod Fish Co. is in a plaza in S Ft. Myers, small but very quant! It truly has the look and feel of a seafood restaurant in the North East! Both my dinning partner and myself were pleasantly surprised by this and both commented how we could find this in our home towns, both in the North East! The staff are warm, friendly and very welcoming! As we entered the restaurant, which seats about 30, we noticed they were about half full. This was a good sign! It was a beautiful day so we had decided that we wanted to sit outside before we entered. Cool and breezy, the first real day of fall here in SW Florida so we wanted to really enjoy it! We went inside and were greeted with a very welcoming and friendly “Hello and Welcome to the Cape Cod Fish Co.”. This was a great touch, as already we felt at home! We were told to sit any place and we let the hostess know that we wanted to sit outside. We were told to pick any table, about six outside, and we would be taken care of shortly. We found a table and commented on how much we liked the restaurant so far. We were not sitting down more than a couple of minutes when a waitress brought menus out and told us of all the specials they had for the evening. She then told us to look over the menu and when we were ready to order, come on it to the counter and place our order. Again we both commented on how this is so much like places on our Northern home towns! The menu is filled with lots of North Eastern seafood favorites! From Steamer Clams to Mussels to Fish to Lobstah Rolls to Shrimp to everything you would expect in a Cape Cod Restaurant! My dinning partner decided upon the New England Clam Chowder as a starter and the Lobstah Rolls with “Home Made Fries” for a main course. I decided upon the Rhode Island Red Clam Chowder and Half A House Salad for a starter and the Atlantic Cod Fish-N-Chips for a main course. We went back inside to place our order with the cashier. Easy experience with a very friendly and helpful cashier! All the employees we encountered while there were just that, warm, friendly and always making us feel welcomed and like we were the only ones there and they were quite busy!!! Nice touch!! Now this is where I want to remind you that I am not a fish lover at all, but did want to give the Cape Cod Fish Co. a chance to perhaps move more towards that of having a more “fish friendly attitude”. We then paid, our bill was under $55 dollars. We did think at this point, perhaps a little pricy but we did want to hold off on that thought until we did partake of the bounty that was to come.

We got our drinks and headed back outside to enjoy this beautiful evening here in Southwest Florida. We were enjoying this beautiful evening and noticed the steady stream of people coming into the restaurant. A good sign to both of us as that told us that the food must be good to have patrons coming in such a steady stream. We notice that the ones that order a “to go order” would collect it and then sit at one of the tables outside to enjoy it. We both commented again on how much this truly reminded us of the places we knew in our home towns in the North East and how families would do the same thing, call in an order and then find a table outside to enjoy it at! Again, a good sign to us. We waited no more than 5 minutes for our “Starters” to arrive. Now the Half A House Salad that I ordered was clearly enough for the both of us! The waitress asked if we wanted a plate to share the salad and I said that we would! Now the Rhode Island Red Clam Chowder was “off the hook” delicious!! Now while I do not care for Fish, I do like clams, mussels, shrimp and lobster. There was no shortage of clams and I am most certain that this Rhode Island Red Clam Chowder was made right there!! Lots of clams as I said and the potatoes did not come from a can as they were not totally soft and falling apart, they had some body to them and their flavor only enhanced this red clam chowder! And the heat spice was done to absolute perfection!!! Actually I could go for another bowl as I am writing this!!! My dinner companion loved the flavor of the New England Clam Chowder, making the same observation about the amount of clams and the potatoes coming to the same conclusion that the New England Clam Chowder also had to be made there. They did make one notation that while the flavor was fantastic the broth was not as thick as they would like it to be but the flavor was spot on! So they could take the thin broth as long as the level of flavor was a “10”!!! We then split the “Half of House Salad” as there was more than enough for the both of us. We both commented on how fresh the greens, cucumbers and tomatoes were in the salad. It did not seem that they went to the local grocery store for these items but more like a fresh Farmers Market for these items as they tasted too fresh!!! Blue Cheese was added which was a delightful addition as we both love Blue Cheese! And let me tell you, the house dressing, a vinaigrette, was divinely delicious!! They truly have out done themselves with this dressing!!! We were nearly done with the salad and here comes our entrees. I was told that the Fish was very very hot!!! No worries as I wanted to get every drop of dressing of my plate so I would work at that while my fish cooled a bit. Now remember we commented on the price of everything in the beginning. Well, when you serve very fresh seafood with Healthy Size Portions, the price of the menu begins to get better! My dining companions Lobstah Roll was loaded with Fresh Lobster!! To me it looked like more than a whole lobster in their wrap as it was over stuffed! They indicated that it was not just tail meat, but lots of claw meat as well!! Then they commented on the fries and said that indeed they were homemade and truly a treat with their meal! Now the true test, the Atlantic Cod Fish-N-Chips! I bathed the “five” pieces of cod with the lemon that was provided. Took a piece of the fish with my fork and immediately noticed how it flaked apart. It was not greasy at all!!! Took in the aroma of the fish, no over powering fish smell at all! So far, it is looking good! Took the bite and WOW!!! The flavor was nice!!! I wanted another bite quickly and began to think to myself, has the Cape Cod Fish Co. done it, have they made me into a fish lover? My dinner companion could not believe that I was enjoying the Fish-N-Chips as much as I was and indeed I was enjoying it!!! Bite after bite I was amazed at the flavor, the freshness that I have always heard chefs talk about, that good fresh fish does not have a “fishy flavor” which is the part I never like about fish! I never cared for fish that had a very over powering “fishy flavor”. I was always told that I never truly had fresh fish and that is why I didn’t like it. I just always thought that all fish tasted that way and it was not within my pallet to appreciate fish! But now I fully understand what I had always been told, I never truly had properly prepared fresh fish!! I agreed with the dinner companion about the “Homemade French Fries” that yes they truly had been made there and were an excellent addition to this meal!! I had told my dinner companion that the only thing that would have made the Atlantic Cod Fish-N-Chips better was if they had given a few less French Fries and added another piece of Cod. I was full of the fries but could have eaten another piece of fish, yes you read that right, the “non-fish lover” would have liked another piece of fish!!!!! So yes, the Cape Cod Fish Co. has turned this “non-fish lover” into a “fish lover”!!! Well done!!!!

After enjoying this meal, we began to discuss the prices. When we first arrived we did think that they were a little pricy! The average of an entrée is between $14 and $20. However, after eating the items, we definitely realized that the ingredients used are “fresh” and are “well prepared” and “do make you feel like you are at an establishment in the North East” and now take the stance that the prices are good, as you are getting quality, dam good quality for your money! So don’t let the prices scare you off, you are getting great value for your money at the Cape Cod Fish Co.!!!!!!

This dinning experience will last with me for a long time, as now I know where to go to get excellent seafood, prepared in a manner that truly brings you to Cape Cod right here in our community!!! From the ambiance of the restaurant, to the staff to the food itself, a definite home run right here in Southwest Florida!!! Definitely a place you want to try if you are a seafood lover (especially a Cape Cod style of seafood) and a definite place to try if you are just like I was, a “non-fish lover” as The Cape Cod Fish Co. will turn you into “Fish Lover” bite after bite!!!!

The Cape Cod Fish Co., a Southwest Florida gem, bring Cape Cod home!! Give it a try, you will be glad you did, and when you do, let them know you learned about them right here on the Discriminating Diner from What’s Up Southwest Florida!!!